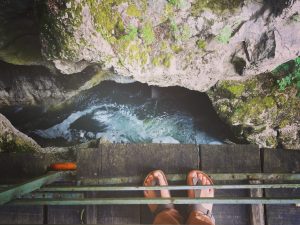 During a private class of pilates, I was letting the instructor know that I was unsatisfied with the fact that after months of doing private classes, I didn’t feel that I knew how to hold my posture properly. That I was still unclear about how to turn on the core muscles and associated muscles, in a way that enabled better posture.

After the instructor watched me closely as I tried to turn on the correct muscles, she told me she thought it was because I wasn’t turning other muscles off, therefore I wasn’t able to achieve the better posture I was after.

So the instructor had me lie down with one of those really hard foam rollers under certain areas of my body, and to my surprise, I found that the foam roller actually worked. The tension in the muscle was releasing. And the thing I found really interesting—and that is actually the point to this story—is that as the tension in the muscle left and I was able to relax more and more, the better my posture became—naturally!

Very quickly, I made the mental connection with what I do to assist people. I was able to see the parallel. I’d just experienced on a physical level what I do on a different level. I help people to heal from past stuff that they’re still carrying around, which they may, or may not, be aware of. Or to deal with current issues they’re struggling with.

It’s the one who feels confident, and feels like she belongs. It’s the one who enjoys connecting with other people and is warm and loving, able to give and receive love.

It’s the one who is able to communicate, both the easier stuff and the more challenging stuff, in a way that’s respectful to both her and the other person. It’s the one who feels hopeful and optimistic about her future, and knows she’s exactly where she’s supposed to be at this very moment in her life.

I’ve had times of being this person. Not as much and as often as l’d like, though I’ve learned how to be her more and more.

What I know now, that I didn’t know before, is that making sure we take the time to feel good in our lives is a major key to being able to be that person more often than not. It wouldn’t be human to be that person all the time. Life happens. We’re supposed to have a full range of human experience. Light and shade, yin and yang.

Sometimes I go through periods of feeling sad about how certain aspects of my life are, thinking I hadn’t done well enough, that I’d made mistakes, and that I still didn’t know what the heck I was doing. And yet other times, it’s the complete opposite. I feel like the person I described before, completely satisfied that I’m exactly where I’m meant to be, and that I’ve got everything handled.

How I feel greatly influences this perspective, as well as the way that I show up in my life.

In fact, science has shown us that positive feelings open our hearts and minds—they literally have an opening effect on us, which means that when we’re in this open space, we’re naturally more of who we really are—and the beauty of who we are shines so much more easily.

What are you going to do to feel good today?

If you’d like to know more about getting rid of the stresses in your life and feeling better, you can learn more here.