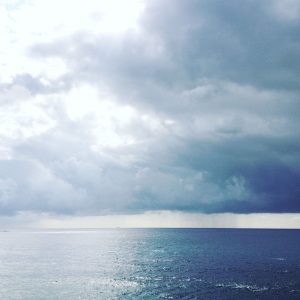 The relationship had been challenging, to say the least. Having figured some stuff out, I was now confident that this situation was no longer going to upset me the way it had done in the past.

Which is why the next time the same situation came up, I ignored the initial tensing of the body and the dreaded feeling of, “Here we go again”. Pushing all of that away, instead, I chose to focus on my resolve to stay positive.

Over the next day or so, I noticed that I was feeling more and more tense. Finally it dawned on me, after two nights of disturbed sleep and no longer being able to ignore the tension within, that I’d been lying to myself.

“Who was I kidding? That really pissed me off!”

Even though I was trying to be all Zen about it, the truth was that it did actually upset me.

I’m sure we’ve all been there, when you tell yourself you’re never going to let this thing get to you again—this person or this situation. Or just having something happen that triggers you emotionally and then not admitting it.

We do it because maybe we haven’t actually recognised that it’s triggered us. Or, sometimes we do it because we think we’re being resilient (which we’re not). We try to be positive when the truth is that we’re hurting, and this kind of positivity is fake.

The pitfall of positivity is that we can think being positive at all costs is more important than how we actually really feel, however, being fake with our positivity can have damaging effects.

On a spiritual level, it takes us further and further away from our truth and our connection within ourselves. We start to feel more and more disconnected.

On a physical level, I’ve seen people who bottle up emotions until eventually they start experiencing physical symptoms such as back aches and headaches. Research has also shown just how harmful faking positivity can be.

In my study of positive psychology, I’ve come to learn and appreciate just how valuable positivity is for us. It enables us to function optimally in many areas of our lives, including physically, psychologically, intellectually and socially, and is an important part of a flourishing life.

However, the many benefits we experience from positivity only happen when it’s real and genuine. And when it’s not, well, then there’s a part of us that knows we’re lying to ourselves and that’s when it can become harmful.

Researchers did a study to see if expressions of anger on the face would predict changes in the heart, specifically myocardial ischemia, which is when blood flow to the heart is reduced, and can lead to a heart attack. They found that patients with significantly more expressions of anger did show ischemia—as well as another unexpected finding.

As part of the study, interviews with coronary patients had been filmed, whilst at the same time using an imaging technique to see what was happening with the heart. Researchers coded facial expressions of emotions that aligned with the heart imaging. From this process of observing every facial expression, they were able to see when someone genuinely smiled throughout the interview and when someone was expressing a “non enjoyment” smile. When someone genuinely smiles, it contracts the muscles around the eyes, whereas a fake smile doesn’t.

It turned out that fake smiles were also characteristic of patients who showed myocardial ischemia.¹ This was a surprise finding that tells us that faking positivity can have a damaging effect on the heart.

Other research has shown that when we’re in a stressful situation and saying positive things to ourselves, it’s only when we feel the corresponding positive feelings that go with the thoughts that it actually has the ability to reduce cortisol levels in the body, otherwise, stress levels stay the same.²

So what do we do then, when we’ve made a resolve to be more positive and end up finding ourselves being negatively impacted?

Start with being honest

Without being honest about where we currently are, there’s no real ability to move forward. If I’m trying to get from point A to point B, yet I’m not even at point A—I’m actually at point C—then I’m unable to accurately navigate my way to point B.

Once an emotion has been triggered within us, then it’s too late to pretend it hasn’t been. We have to address it. There’s usually no moving forward until that emotion has been acknowledged. And sometimes it really is as simple as acknowledging it, and then giving ourselves permission to feel however we feel instead of judging ourselves for it.

Attempting to move forward without the acknowledgement of what we really feel is like trying to walk whilst pulling a heavy suitcase, dragging our baggage behind us.

Tips for avoiding the positivity pitfall:

Whilst this may sound simplistic, it’s a good place to start! You may be surprised just how often we can miss that something is going on for us.

Find out more about sessions here.