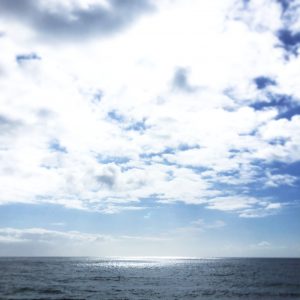 I wish I could show you, when you are lonely or in darkness, the astonishing light of your own being.”

As I stood there watching the ocean, I remembered to look up, as I’d been reminded to do by Spirit. They said the stars and the moon are still there even during the day, so we can still connect with them even though we don’t see them. I imagined the stars there, and remembered that I come from there. I don’t know whether I exactly come from the stars or not. What I do know is that I come from a place that is of a higher vibration than where I am now.

Where I come from, I know myself to be the love and light that I am. Where I am now, I’d forgotten. I’ve had reminders, and I know it intellectually, though I had rarely lived from that place.

I came here as a complete loving being, made perfectly for whatever I came here to do and learn. Along the way there have been emotional wounds—some scratches, and others have been deep gaping wounds.

Those wounds were made up of being told that I wasn’t good enough. That there was something wrong with me. And treated as though I didn’t deserve to be loved. Instead, I was punished, over and over.

Growing up in that kind of environment, it’s pretty much impossible to not take on what is being said to you. And up until recently, I had struggled with this.

Standing there by the ocean, and remembering that I am more than this struggle, I asked myself how it is that I can stop struggling, stop feeling hurt.

And the answer came:

Stop believing the lies you were told. The people who were supposed to care for you were all deeply hurt themselves, and had no clue how to handle it. They projected their feelings of unworthiness onto you, until you believed it about it yourself.

Every time you believe the lie that you are unlovable, unworthy, undeserving or not good enough — you reinforce the lie.

Remember who you really are.

This is how we ultimately free ourselves from the suffering.

Find out more about sessions here.